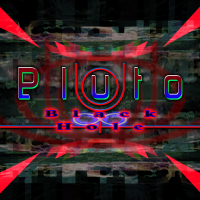 Pluto, a dance track from Hades which conveys a beautiful melody of piano and strings, leaving one in awe.
This song would be familiar to you if you have played DanceDanceRevolution SuperNOVA2 and was one of my favorite songs from the mix. Since the tone of the song was similar to the theme of DJT, we asked NAOKI if we could use the song in CS DJT.

Now, Pluto from DDR was known for its sudden BPM changes, so the staff discussed whether those BPM changes should be retained in IIDX, and it was decided that the BPM changes would stay, because it was the artist's intention to make the song with the idea that there would be BPM changes during the song.

I hope there are players that can master these BPM changes and can enjoy the song.

Pluto. And that's all I have to say.

The clear and harmonious piano melody is very impressionistic, and no-one can control their uplifting pulse as they dance to this song. The rhythm smoothly changes from regular to irregular patterns. What is it expressing...?