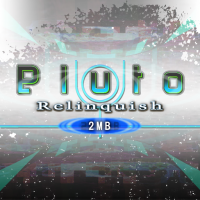 Why do you need KONAMI original songs? It's as ever changing as the times...

The absolute darkness hangs perfectly still as I watch the expanding heavens. And it will still be hanging there even after it has faded from human memory. Outside the ring.

Standing on ground too distant to receive the Sun's

warming rays. In isolation, my reach extends yet still cannot be touched by the myriad of stars. Am I still your companion? Your equal?

Pluto Relinquish comes from the mind of