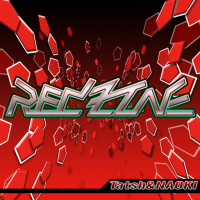 The genre of SPEED RAVE has been almost forgotten, with a faint heartbeat, until the next generation of composers shocked and revived it....
SPEED RAVE itself hasn't been used much, but Tatsh was talented enough to make a song based on this genre, and I finished the song based on my memories of previous songs.
Named RED ZONE, it feels like an authentic speed rave song, conjuring the feeling of high tension and the thrill of racing a car.
After listening to this song, you may feel that you want to race on the highway!
But remember, speeding is bad. (Laughs)

Yes, I've been caught speeding before.

I love the speed rave genre.
Here, we both collaborated together to produce a song based on this.

To research, I went to different arcades, listening to old speed rave songs.
My experiences there with the speed rave genre made me feel that the music was more based on speed with aspects of rave mixed in.
And so I made the track based on that.

I want you to make an awesome groove, by all means!
I've heard this line somewhere before.

※ Denotes chart is different from the newer arcade chart: