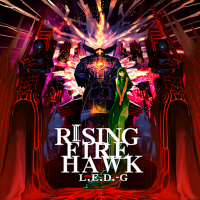 Well, I tend to be one step too late on a trend, and I feel that this time is Hardstyle.
Actually, I challenged myself to do Hardstyle songs a couple of times in the past, but I was not satisfied by them and gave up.

For example, there is an event song called NEO GENERATOR SEVEN in beatmania IIDX 22 PENDUAL, which was really supposed to be Hardstyle.
"I have given up several times in the past, but this time I will make a hardstyle with a certain degree of patience!" Although I decided to challenge myself, it did not go well, so I changed the song just before the deadline, eventually settling it in MAINSTREM HARDCORE [sic].

So, when I received the request from the DDR staff, after deciding that Hardstyle would match with the nature of a DDR game, this time I had the determination to complete it, and I finally was able to create RISING FIRE HAWK.

It seems that my insides, which had been struggling in the past, are feeling nice when listening the finished work, so I think that it was worth the effort.