Reaching for the Stars

Reaching for the Stars 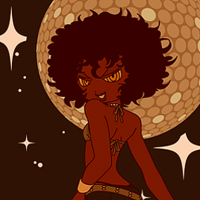 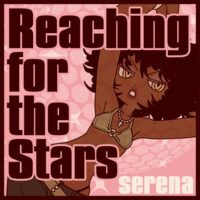 This is a sort of spiritual JAZZ SOUL that is meant to played at a certain blue-colored club in the now defunct Minami Aoyama area.
I aimed to create an adult sound based on the rhythm of the rare groove sound that may have been the origin of drum'n bass or the jazzmen of the 70's who experimented with drum'n bass.
It's called "human-powered drum'n bass".
I came up with the phrase for the guitar solo in the middle, and if this wouldn't be a Gitadora song, this part would have featured a tenor sax instead without hesitation.
So the solo also has sax-like rhythms.
So, please play it like you'd have played a sax. Bubebebebe.
The vocalist, serena, got this song just right in one or two takes.
It was the same as with Twinkle Star.
Really........ She's amazing! So great.
And this song also has the heart-thumping magical seduction instrument, FENDER RHODES. Of course.

The genre I was in charge of this time was (J?)R&B. This song is not too maniacal, and I think it's very easy to get into and listen to.
The version I was listening to at the time of production was a beta version, and I think it will be much better when the vocals are added.
I usually listen to R&B and HIPHOP from other countries, so the atmosphere of the clip was perfect for my illustration image.

■ Clip setting ------
The main character in this clip is a black lady who loves to dance. I didn't think of her name specifically, but let's call her "Betty-chan" because she has kind of a chubby mouth.
I also didn't think of names for the other four handsome men.
Hagu was a little disappointed that there was no guy with glasses. In the production stage, I had skinheads and light-colored glasses guys, but it became too sophisticated looking, so I opted for a wilder image here.
Also, I was very particular about her poses, so please enjoy them as well.

For this song, I was in charge of creating the storyboards, the clip, and porting it to the game.
The highlight of this clip would have to be the four handsome guys that Baron drew! Reverse Harem Pantsai!
I'm nosebleeding★
Personally, I like the sleepy-eyed guy in the knit hat.
However, as a believer of good looking glasses, I can't help but regret that there were no good looking glasses guys in the movie....
Anyways, most of the movies that I've been in charge of have an ending, but this clip does not. (Uh, I guess)
I tried my best to make this clip as stylish as possible, while trying hard to suppress my desire to goof off!
Everyone, enjoy!