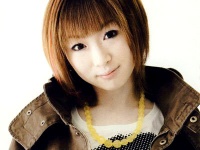 Riyu Kosaka (born January 17th, 1985 in Kanagawa) was the lead vocalist/lyricist of former BEMANI J-POP group BeForU, and the only member to stay in the group from its conception in 2000 until its dissolving in 2009. She was also featured in more singles in BEMANI than any other vocalist from BeForU, most of them composed by Naoki Maeda, who scouted her out.

Since leaving BeForU, Riyu has sung songs for various anime and video games and is currently signed on to 5pb records. Her first single since her BeForU days, 最初のMELODY, was released on October 26th, 2011.