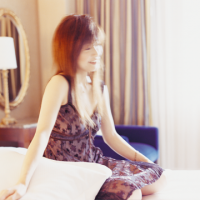 Hi, I'm the Shintani of Shintani Akira.
"Ryuusei☆Honey" is me. This song will melt into your brain and poison you until you play it on loop,
Always asking yourself, "Is this enough?"
Are you ready?
I guess I've been poisoned like that by myself. How could you do this? Akira-san!

Hello, I'm the Akira of Shintani Akira.
"Ryuusei☆Honey" is my partner Shintani. This song is like an anthem for Shintani Akira,
So I don't know how it will work out for people who like that sort of thing.
Come to think of it, I was poisoned by Shintani. How could you do this? Sanae-san!

"Energetic, cute, lonely, and just a little ecchi *g*"
↑ I got a copy of the song from Akira with that comment.
I thought, "Cute and energetic means a ponytail!", and got straight to work;
with "Ecchi? That'd be a miniskirt!" I started working even harder!!
Even though everyone would say, "Huh!? What's so great about that??",
I'd do it because "'coz that's still the kind of thing I like!!"
I dunno if it's kind of childish but it's just that kind of one-sided love story, right?!

This is overall a great song with a really good beat,
but the best thing about it is the shouting!
There were even two people on the team
who would play the song while shouting the words.
It sounds like they're saying "P.L.A.N.E.T.",
but since I can't really tell when I listen to the song,
I'll have to leave my shouting debut until next time when someone can tell me what they're saying.

Akira-san always wanted to do a song for pop'n. This time, it ended up really flirty and combined lots of things I didn't really get, but he's always had a way of doing things I've never really understood much from the beginning. You get used to it. The comments for the location test were, at the time, done with an uncontrollable energy, but he got so angry that people were scared. Lately he's always been angry too.

It came out pretty sharp.
What happened to that guy that was eating the hamburger? It looked really yummy.

Dani is growing on me.
Chihi's Dani girl design is the best!
Her form is magnificent as she runs through the night☆