This page is for the beatmania IIDX DJ Sakura. For the songs titled Sakura, please see Sakura (disambiguation). 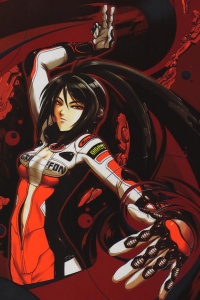 Sakura from the IIDX RED cover.

Died of an incurable illness in the intensive care unit of a certain hospital in Tokyo. However, for some reason, her soul was not allowed to ascend to the next world; instead, she possessed the human girl, Iroha. She had been beaten by Nyah in IIDX matches many times before, so after death she became a ghost that haunted Shiki's game center. Whenever she passed by Iroha, who possesed an unusually strong spiritual power, she would become trapped in Iroha's hairpin. She was once able to take full control of Iroha's body, but could not continue the possession for very long as it was a very draining process.

After some time a messenger from the next world appeared before Sakura: Mis, a death god belonging to the spirit world's division of longevity records. She was meant to live for much longer than she had, but an apprentice death god had reaped from the wrong room by mistaking a 9 for a 6 in Sakura's room number. So, she would be immediately transported back to the other world. And so, with a mighty yell of "What the hell!?!?", Sakura was returned to the world of the living.