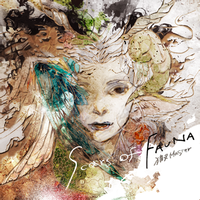 "The earth... The earth is fighting and calling for me!"
"Whaat! Whoaaa!"
I screamed like that and I was covered with dirt from head, then I woke up. 5:30 AM.

This time it will be for four games at once! So the theme must be splendid!
For example, how about fire-water-wind-earth?

"Oh! The four elements is fitting!"
"Then, I wanna do earth!"

That is kind of how the struggling, full of tension meeting ended.
With the earth element as concept in mind, I finished a splendid and elegant song.
The percussion rhythm that shakes the earth and the connecting melody line,
I will be happy if you feel fulfilled from playing this song.

Firstly, draw a goddess. Next, add parts of animals and plants around her. Lastly, add up the earthy element in it and it's finished. Fueled by the full throttle nostalgic Nekomata melody I drew this piece in one go. That's it about the jacket art.