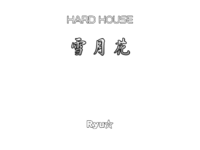 Hello again from Ryu☆. Fortunately I've been able to make another appearance in the IIDX series. This track combines the image of the snow, moon, and flowers, representative of Japan's beauty, with a hard beat. How about those scratches on the wood beats!? They're hard, but I hope you will play it a lot and, by mastering it, will be able to appreciate the elegant beauty of the song.

Japan's a pretty good place. As long as people can remember we've become close to and appreciated the elegance of the four seasons as they change, and sometimes even walked the path of their change with the gods. In the quest to capture the essence of such a nature-loving spirit, people have created expressions of visual and aural beauty; our history is deeply colored with famous paintings and songs that stem from this pursuit. I believe this is the irreplaceable treasure of the Japanese people: the wonderful gifts from the past that let us imagine the bygone ages that we cannot see for ourselves.

I'd like to offer a toast to Ryu☆, who has given us an expression of the essence of what is Japanese that reaches out to the shadowed streets of our modern cities, where many cultures have become blended together in our modern world. It's funny to think of IIDX being discovered by someone far off in the distant future, and being the only window into the spirit of modern Japan for the people of the future. All-too fleeting peace... Rightness is but another style for Ryu☆.

Surely, it is the beauty of play.

I've selfishly attached my own image to this work.

The daughter of a samurai, illuminated by the light of the moon whose beauty is reflected in her. Thinking of the man who raised her, standing by her even as he seemed to stand against her, her breath breath quickens as she gazes at the flowers in a garden painted deep blue by the moonlight. This one man, alone, running through the night as the leader of the opposition. Would his heart still reflect the man he once was if they met, even though he is a criminal? Surely some day soon they will be able to consider their differences ... once again, in this garden. Again today the daughter wishes for the man's safety in the moonlit night. Praying that he might even value his own life above his pride.