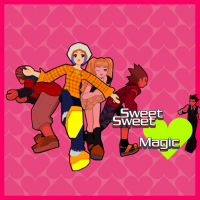 "One encounter changes who you have been......
Just by being together, every day is fun, and I can see the entire world shining.....
I attempted to create it as a romantic love song for every girl to yearn for."

.... Well, it's been around one-and-a-half years since I wrote the comment for the DDRMAX2 soundtrack CD. I never thought that it would be ported over to IIDX this time.
This song is jun's first work in the BEMANI series.
It's been a long time since I heard about this song, and I listened to it again, and the thoughts and events of those days passed by as a flashback.

For some reason, I feel both sad and happy.....

Reading that, you may think, "is this a middle tempo love song?". But as you can see, it's a 180 BPM happy hardcore track.
For those who recognized it in MAX2 and to those listening for the first time, you will feel happy and energetic when you hear this song, as it blows your troubles away beyond the sky!

And finally.
To the IIDX staff, who gently scooped up the fragments of the past, and to those gathering in "this place" right now.

(It's read as "Sweet Sweet Love Magic".)
One encounter changes who you have been......
Just by being together, every day is fun, and I can see the entire world shining.....
I attempted to create it as a romantic love song for every girl to yearn for.
Ride the speed, and have fun dancing.

jun, who is well-known from the DDR and pop'n series, finally appears in IIDX!

Everything and everyone will flow backwards in an instant!
Run through the storm of fireworks at a super high pace like a machine gun!

Please experience the thrilling world of super speed, where you could feel like being blown away if you don't concentrate.

My first impression was "that's fast!" (laughs). It's a very lovely song & title, so the peach background is in full-effect.
"I want you to put a lot of hearts in the video"
Was what jun told me, and I fully loaded the distribution of hearts everywhere.