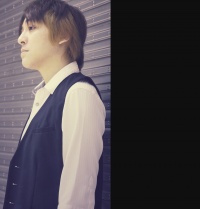 Takahiro Fukase is a Japanese techno and drum'n'bass music producer. He has become popular with the SOUND VOLTEX series after winning a few SOUND VOLTEX contests and most of all, by creating charts for some of the most known boss songs of the game, such as Max Burning!! and For UltraPlayers. While he doesn't participate in FLOOR contests anymore, he's currently one of the regular effectors. Takahiro has also worked as a beatmania IIDX and pop'n music chart designer.

Outside BEMANI, he appeared on SOUND VOLTEX-centered compilations such as the ones from the Movement on the FLOOR doujin label and released solo albums and compilations under his label, PHQUASE PHRASE. He was also a member of the Riverside doujin circle, during the years when it was led by DJ TOTTO.

Takahiro Fukase is part of the beatnation Records label as of May 28th, 2014, as 猫叉Master's choice. As of late 2017, he is now employed at KONAMI as a member of the BEMANI Sound Team.

Takahiro is currently the sound director of the SOUND VOLTEX series.