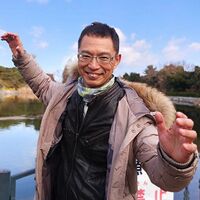 Takuya was a long-time contributor to the GITADORA series, who's been with the franchise since the original drummania as a product designer. He also worked on Dancing Stage featuring DREAMS COME TRUE and Dancing Stage featuring TRUE KiSS DESTiNATiON around the same time in the same position. Starting with GUITARFREAKS 5thMIX & drummania 4thMIX, though, he moved up to a become a CG and movie designer, becoming one of the series' longest-running movie artists.

Takuya was one of the design and technical managers of the GuitarFreaks & DrumMania series until his departure from KONAMI in January 2022 [1]. He's currently a freelance designer and works as a teacher at HAL Osaka.