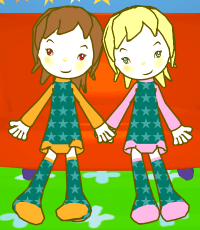 Twin girls who are type B and 19 years old. Tart (blond hair) is a pastry chef, while Toffee (brown hair) is studying to be a Web designer.