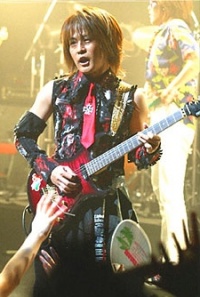 Tatsuya Furukawa (born August 11th) is one of BEMANI's best known commission artists, and for years was one of the most active composers in beatmania IIDX and pop'n music. He has dabbled in genres ranging from house, R&B, and disco to even metal rock and 80's new wave. In early beatmania IIDX games Tatsuya also commonly used English vocalists, not unlike NAOKI and the occasional GuitarFreaks / DrumMania track.

Prior to composing songs for BEMANI, Tatsuya provided arrangements for Tatsunoko's Space Knight Tekkaman Blade. He also provided music for the PlayStation Portable game Love 0 Kilometers, as well as for some works on the Diverse System doujin circle.

As of late 2015, Tatsuya has started his own indie label, G-C VIBES. He's also part of the A2COOL unit with Atsushi Shindo.