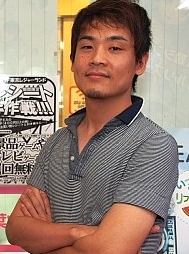 Tatsuya Iyama is a composer who first appeared in BEMANI in charge of several covers of licensed songs. Since then, his songs were primarily brought into the GuitarFreaks & DrumMania series from various KONAMI redemption games, such as SPIN FEVER, SPIN FEVER 2, and FORTUNE TRINITY. Afterwards, he started composing brand new songs for the GuitarFreaks & DrumMania series, and also for other BEMANI games, such as beatmania IIDX, pop'n music and REFLEC BEAT.

Tatsuya's music tends to follow a pop/piano tone with his Qrispy Joybox songs (with a couple of techno songs as well), and a more hardcore/rock sound with his MAX MAXIMIZER songs. He's also experimented with various other aliases in recent years. Since Daisuke Kurosawa's departure from KONAMI, Tatsuya has assisted as a guitarist/bassist under his TATSUYA aliases for several songs not composed by himself.

Prior to joining KONAMI, Tatsuya had a duo named Moon Beams with Chie Nakamaru (mao), performing rhythm and blues songs.