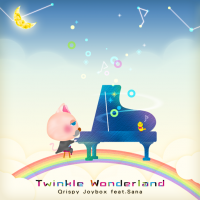 Refreshing sensation 200%! Surrender yourself to the high-speed beat of the wonderland that is coming soon!

Oh... it is also included on "Sana Coffret".