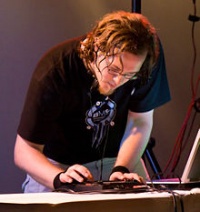 Bill Shillito is a producer and composer from Brooklyn, United States. He started playing piano at the age of two and composing around age eight. He also has played viola since age 12. In 2002, Bill started composing tracks using FruityLoops Studio 5. In December of 2002, he remixed MAX 300 and MAXX UNLIMITED together as MaxX ResurrexXion under the alias DJDemon for bemanisims.com. In May of 2003, he won the DDRei TournaMix 4 contest with his song neoMAX under the alias DM Ashura.

In September of 2005, Bill produced GO! for the Korean game O2Jam. In May of 2006, he was one of the winners of the Broadjam DDR SONG CONTEST 2008. Bill won with a remix of GO! titled GO! (Mahalo Mix). In 2008, Bill created five tracks, four for DanceDanceRevolution UNIVERSE3 and one for beatmania IIDX 16 EMPRESS.

Since 2012, he is active with various songs for the ANDAMIRO's dancing simulator game PUMP IT UP.