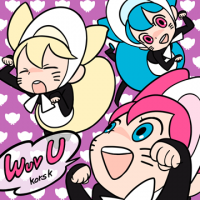 I remember this! I finally remembered to do this!
Wuv U was created during the peak of the summer season.

This song was the third in the Candy series, after SigSig and smooooch・∀・.
It was a tough hurdle to make a song as good as the previous two, and progress in making this song was slow.

Although I felt that I dod not have enough time, I was invited by a friend to attend a open air BBQ near the sea as well as a nearby summer festival, which helped to relieve a lot of tension for me (laughs).

There is a bit of reggae in the introduction which symbolizes the summer.
There is a lot of energy in this song, but at the same time, there is a feeling of loneliness and sadness, as the sun slowly sets and summer fades away.