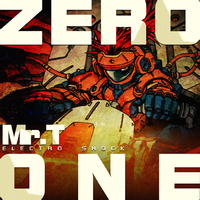 A week before my deadline, I hadn't even decided what kind of song I wanted to write. I was under a lot of pressure to do something fast ... and on the morning of my final decision, I ended up sleeping in really late. What could I do then, even if I hurried? I rode the train in to work feeling really horrible. Then, all of a sudden, a strange melody floated to the surface of my mind. I ran over it a bunch of times in my head, and wrote in down on the back of a receipt so I wouldn't forget it.

So! Electroshoooooooooooooooooooooooock! Huh, what's that? I guess I can't just put down a weird word like that, huh? ... but you know, even I'm not sure exactly what it is. Anyway, I slept in late and rode the electric-powered train in, and a kind of electronic song appeared out of nowhere like a shock! So that's electroshock! Right?

So what about "Zero-One"? Well, you know, the name has kind of a digital feel to it. I think it works pretty well. It's fitting, right? It's okay to be arbitrary like that, isn't it? ... moustache! I DON'T GET IT AT ALL!

Hehehe ... well, I'm pretty satisfied with it, so I think it'll be okay.

(Note: ... "moustache". In Japanese, it's "hige". Mr.T has one. Think of it like an anime character that appends the same word to all their sentences. "I'm Mr. T hige. Nice to meet you hige.")

A week before my deadline, I didn't even know what kind of song I'd be doing work for. I wanted to be able to listen to it already ... During those pressure-filled days, I'd always sleep in really late. I'm not a morning person. It bothers me. Well, I thought at that point, I guess it's too late to really matter now, even if I hurry. ... I thought as I leisurely took a morning bath. Sorry. But as I was doing so, a weird image suddenly floated to the surface of my mind. It zoomed through my head over and over again, and I drew it on the back of some ads that were scattered around so I wouldn't forget it.

So! Electroshoooooooooooooooooooooooock! Huh, what's that? I guess a weird word like that doesn't really work, huh? I don't know English ... Anyway, I slept in late and then was staring at the electrons on my CRT monitor, and a weird electronic image floated to the top of my head out of nowhere like a shock! So that's electroshock! Right?

Well, what about the English spelling? Well ... in the genre name in the animations, it looks like I mixed up L and R. It's like mixing up left and right, it means something TOTALLY DIFFERENT ... but I already uploaded the image to our production machine before I realized it. Really, that's what happened. No special meaning behind the difference. I guess that's one of the problem with coined words. But you get to make the rules if you come first. I think it works pretty well. It's fitting ... right? Is that really okay?

I DON'T GET IT AT ALL!
(Comes the cry from within Mr.T's heart.)

Ahaha, well, since Mr.T seems pretty frustrated with it all too, I think it'll be okay. Sorry.

※ This chart is different from the later BEGINNER chart (total notes: 413).