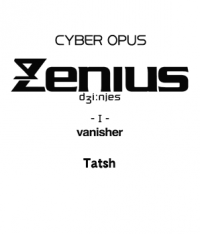 The Tale starts
All people were born from the god.
To challenge fate, people live.
The world where only innocent child exists.
However, here is not never-never land.
Children is looking forward to a light in the dark world.
The child is naturally the creator.
Power that god gave.
Memory of this world accumulated in small brain.

The life buds
The life was born here
Because you are Zenius…
Will breathe the life to you.
I feel you.
The mind of mother melts

This is a song where I tried a many things.
I thought about it during commuting, and from the moment when I arrived at the company desk until the night, I made many demos.
This song was born from one of those demos.
(There are also quite a few demos)

I showed the demo to MAYA, and after hearing her thoughts, I changed the development and sounds of the song based on her comments.
Well, there might be disagreements with each other, or even fights.
I'm worried about KAGE and I'm going to reconcile, but I'm happy to think that I have exciting fellows.
So, once I finished with this, I thought: "This relationship is something like a band."

Basically, I listen to songs that are uplifting and positive, but I feel like I made a "crying" song as a challenge.
However, it's certainly natural that there's a positive feeling somewhere in here.

By the way, the title reads as "Zenius ichi vanisher", thank you.

Really, I think that this song was a song I couldn't write unless I met IIDX.

I thought a lot.
It's difficult to not to compare with "Xepher".
"Xepher" drew a world. There was a story.
This time, "Zenius -I- vanisher" already has a world, there is "some" existence there.
The feelings of four people.

I wanted to draw that feeling, but I struggled in many ways.
So I asked Tatsh.
I asked if he wanted me to put the tricky feeling of the song on it.
Sometimes, I have to scrape my drawing heart.
Although it's a crowd, they're crying and angry, waiting to find the happiness at the end.

Please let me procrastinate a bit by talking about this "Zenius".
I hope that we can see another "Zenius" different from "-I- vanisher".

I think that this is movie that I could have not draw unless I met IIDX and this song.