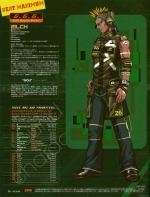 First appeared on the 5th style poster. Zilch hails from Kunogi, in Saitama. Though he's studying Italian restauranteering (at home), his current dream is to open up a ramen stand. He's good enough to be able to pick up new technique through observation. He's been playing IIDX since the days of 3rd style, like Shiki, and he's also good at Drummania. He first got into IIDX by arguing with Nyah about her playing so loudly he couldn't hear Drummania. Since then, his opinion of her has ... changed, somewhat. In any case, he's decent at IIDX, and is steadily getting better. He has a lot of confidence in himself, almost to the point of straight up egoism. It's not unusual for him to stay past closing at Shiki's game center and make Shiki let him play Drummania until early in the morning.

Zilch is the frontman of the three-man band I-A-RU Kanbou (kind of a pun for Music for your Ears). He's also fallen really, really, really hard for Nyah. When he won a date with her, he actually made the effort to dress up and look decent ... but he screwed up and went to meet her at the wrong place, and was five hours late. His room is becoming decorated more by pictures of Nyah than Gundam models lately.