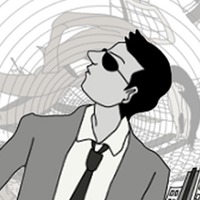 About the song "Circles":

I was walking home from the train station after work one night. It was dark and no one was around.
I found my self humming a bluesy kind of melody.
"What's that?" I wondered. I started adding words to it as I walked. "Feels like I'm going around in circles/ feels like I'm spinning upside down..."
The lyrics are about how a woman can make you feel crazy :-)

I liked the sound of it, so I came up with verse to go with the refrain.
Then I thought, hey... this melody would sound great with a 70's style soul/funk/M.O.R. groove.
So, when I got home I started playing around with keyboard parts and drumbeats on my computer until I came up with a groove that seemed to fit the song perfectly.
I worked on it until 6 in the morning!

Then I sent the track to my friend Hirayama Kunitsugu san and asked him to add some guitar parts.

I didn't think this was a typical track you would hear in GF or DM, because it's pretty laid back but I sent it to KONAMI anyway.
To my surprise they decided to include it in the games!

I want to especially thank Izumi Mutsuhiko san for his help with the mix and re-working the arrangement (length) on "Circles" so it would fit in the game format. He has a magic touch!

I hope you all have a lot of fun playing drums, guitar, and bass along with this song and its relaxed 70's feel. Thanks for playing!

Thomas Howard Lichtenstein composed and wrote Circles. I received the comments from Thomas himself! Of course, they're in English! But the English is simple enough for everyone to enjoy it in the game! You should read them!
In short, "after work I came up with a melody and lyrics that I like, all at once! Everyone, enjoy this song!" pretty much.... (Too short!?)

GF/DM difficulty rated from 1 to 99. (Ratings obtained from BEMANIWiki 2nd.)