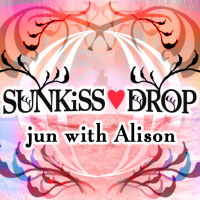 This is a happy core track, plain and simple! Out of the happy core series tracks that I've written so far, I think this one is the most energetic.
This is the kind of song you just can't help writing from time to time (LOL).
And I immediately thought Alison was the only one who could do the vocals for this one.
I never thought twice about having Alison sing the English version of this track.

What was that?! An English version?!
Yep!!!
The track branches when you select it!
The first branch is "SUNKiSS♥DROP ～Alison side～" and the second "SUNKiSS♥DROP ～jun side～."
That's right!
There's a version of the track that I sing on! ;-)
The lyrics are different, and even the arrangement has been changed a bit.
I hope you'll give 'em a listen and enjoy the differences.
I think this is the first time this branching system has ever been attempted in the DDR series.
I wanna get your adrenaline pumping even before the track begins!

jun, member of TËЯRA and one of the main singers / song-writers for DDR, brings us this new Happy Hard-Core song. Showcasing her talent for melody, SUNKiSS♥DROP is another installment in a series of Happy Hard-Core songs from jun. From the very start the unforgettable melody has a strong impact on one's mind. Don't be surprised if jun shows up herself to sing on this song every so often!