Difference between revisions of "Tomosuke Funaki" 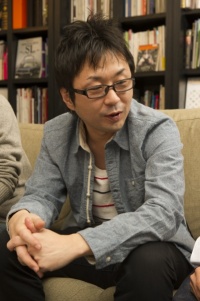 One of BEMANI's best known in-house composers, Tomosuke Funaki first appeared in drummania 2ndMIX, while also being an active composer on the Dance Maniax series of games that came out not too long after. He is best known for his style of music inspired by house, bossa lounge, and jazz tones, one of the first BEMANI artists to use this style of music, and the first in the drummania series to do so. He's also well-known for his Orange Lounge songs with French vocals provided by Shizue Tokui, which spanned near every major BEMANI franchise at the time he made them. TOMOSUKE was also for years a major contributor to pop'n music; from pop'n music 13 カーニバル through pop'n music 16 PARTY♪, he was part of the game's sound staff. In pop'n music he's also composed more pop-like tunes in recent years with vocalist crimm.

In the late 2000s TOMOSUKE became well-known for his series of songs under his Zektbach alias, which spawned an entire storyline that included several future installments across several BEMANI franchises (notably beatmania IIDX), albums, CD dramas, and even an OVA. He also started a new series of instrumental songs under his Kuroneko Dungeon (黒猫ダンジョン) alias.

In 2012 TOMOSUKE created the media mix-project HinaBitter♪, an audio series about a group of high schoolers who form a band to save their struggling hometown. Their songs have stretched to every BEMANI franchise out with the sole exception of beatmania IIDX, and even spawned a rival band spin-off group named Coconatsu (ここなつ), which focuses more on electronic music.

Tomosuke transferred from Konami Amusement to the Konami Digital Entertainment department in 2017.