Difference between revisions of "Akihiro Honda" 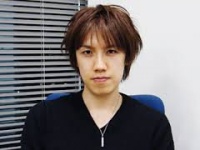 Akihiro left KONAMI in April 2014, he produced music for the Happy Wars multiplayer game from Toylogic in 2015.