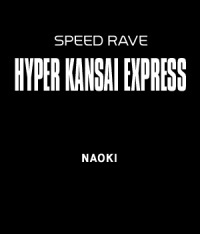 This song is the OP for DanceEvolution, the next generation rhythm dance game released for the XBOX360/KINECT in late 2010.
I felt that this song would be great for IIDX 18.

In fact, there is a bit of a difference between the IIDX version and the game version of this song.
If you have the chance to listen to both versions, try to listen to the differences.

I was born in Osaka, so when L.E.D. assigned the music for the production of the game, he felt that I was best suited to make a dance song from that region (laughs).

I have many memories of Kansai, but I had to juggle many different ideas of how to represent this city in a song.
I decided to make a fierce techno-infused Speed Rave (my term) song.

Under the dark sky of night, do you ever feel the waves of melancholy around you?
Even if I could stop them, I still couldn't completely shake them off. All I can do is run as far as I can.
I want to go to where the highway disappears into the distance, leaving everything behind.

"A sentimental speed song"...a song that puts me into that certain state of mind.
(※ At least that was my impression of it.)

In case you are not familiar with the characters...besides the three familiar IIDX car gals, these two are the best girl racing duo in Kansai.
Emiru Motegi is from a mixed blood line, with her red hair coming from her mother's side and her penchant for racing from her father, a famous rally racer (Emiru Motegi/19/Kobe, Japan)
Aki Suzuka is the beloved daughter of the president of a major manufacturing company, and a mechanical genius in her own right (Aki Suzuka/19/Osaka, Japan).
....I loved making this movie.

Although I haven't worked on a movie with these characters by themselves before, I didn't really have a problem making this movie once I began.
Also, if you look at Aki's pose, it looks like she is finishing eating a piece of takoyaki.