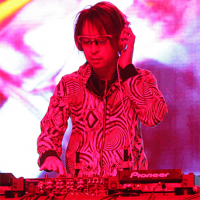 This page is for the artist that goes by the alias of Cranky. For the beatmania artist who goes by aliases such as QUADRA, DJ FX, and nite system, please see Hiroshi Watanabe.

Hiroshi Watanabe, also known as Cranky, is a long-time music creator and one of the oldest names in the Be-Music Source community. Exposed to several genres like classical, rock, and fusion at an early age, he participated in various musical activities throughout his youth. However, it was the sound of Juliana's Tokyo that opened his eyes to the potential of electronic music. Cranky plays around with many genres, but his forte is rave, euro, and orchestra music.

Cranky started producing Be-Music Source files around the turn of the millennium and quite a few of them have become quite popular among the community, including conflict which many see as an anthem of BMS. It was also around this time that he launched the label Feline Groove, which he now manages alongside vocalist and wife Pico.

In recent years, Cranky has made several appearances in a variety of rhythm games. Many of both his older and newer works like Party 4U and JULIAN have also been licensed to these games as well.