Difference between revisions of "Souhaku" 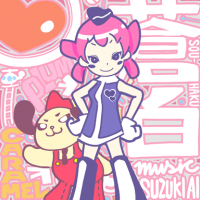 This is the third installment of the Seiron series.

I made a cover of Tchaikovsky's "Pathetique".
It's a very beautiful melody.
The tempo has become faster in the "Seiron" → "Sotto." → "Souhaku" order,
so I went with BPM300 this time.

Also, Ai Suzuki's vocals are cool.
They have a pretty good force.
Please play by riding on the tempo and keep the band steady!