KAGE redirects here. For the licensed song by ニンジャマンジャパン that appears in REFLEC BEAT plus, please see KAGE (song). 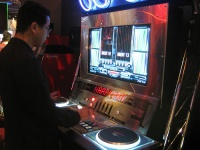 KAGE had been with beatmania IIDX since the very first release, beginning as a programmer in the original beatmania IIDX, and then becoming the series' director for the good part of a decade. His direction has helped bring beatmania IIDX to where it is today. KAGE also lent himself to appear in a few early beatmania IIDX videos, such as Schlagwerk. He was also the director of beatmania THE FINAL.

It is currently unknown if KAGE still works at KONAMI.