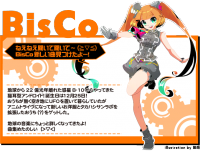 BisCo is the main character in the BeatStream series, and the only character with a voiceover, used as an in-game guide. She was born in the planet called B-10, at 22 billion light-years. She claims that she arrived to Earth by an UFO, wishing to listen to the music in the Earth.

In BeatStream アニムトライヴ, she received a new costume illustrated by 菌類 with a grey colour scheme.

In the pop'n music series, she first appeared as the rival character of EBONY & IVORY, as part of the 怪盗BisCoの予告状!! event.