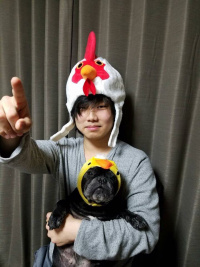 Keitaro Ujiie is a music artist based in the city of Tokyo. As opposed to many of the more club-focused or event-oriented artists, his presence is mostly felt through the internet. Ujiie's music is primarily concept-based and is separated into multiple projects. The first is Ujico*, fusing electronic sound with themes and elements of story/world-building. As part of the more concept-focused approach, genres can often vary between glitch hop, trance, post-rock, and many more depending on whatever suits the production.

In mid-2014, a new project under the name of Snail's House was born. Snail's House, in some ways, can be seen as an opposite to Ujico*, distancing itself from the grander scale of music and focusing its themes on smaller, everyday things. In particular, Snail's House is known for its candied style of music, but much like Ujico*, varies in genre and style depending on its theme and concepts. With constant release after release, the popularity of Snail's House has exponentially increased over the years through a variety of platforms.

Keitaro also makes music under the alias of StripeCat, which is focused on a dirtier, more distorted style of bass music. He is affiliated with a variety of labels (Diverse System, Attack The Music, and wavforme to name a few), but mostly releases music independently.