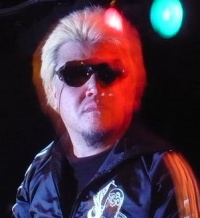 Yosei Watanabe is a Japanese music producer who's been performing since 2000, very notable for almost solely making speedcore tracks, which have made him quite popular. He regularly appears in the main compilations of the X-Treme Hard label, and all his new albums and EPs are released through the Maddest Chick'ndom doujin label.

In the past years he has also produced songs for various other labels, such as Mob Squad Tokyo, SharpnelSound, and HARDCORE TANO*C. He also found a label named PORK (now defunct) and EZiKi.