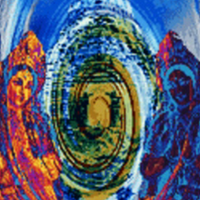 A sound parasite that enters through the ear and implantates in the brain. Take it down before it brainwashes you!

This song was my music game debut, so I have all sorts of memories.
Even though I originally composed it for drummania, it sounded nothing like a band.
I remember my pillow being soaked night after night with dejection over the song's sound and mechanical sequences being disliked.
Then, when I listed to the song again, I noticed that the sounds were rather dull.
Thus, when editing the song for this game, I tweaked it so that it came out sounding somewhat reborn.
Remixing it was rather fun, since I haven't made this kind of song recently.

An irregular goa trance techno. I was inspired to write this song simply because I'm a four-beat (boom-tss-boom-tss) maniac. However, it would be boring if I had to do that from beginning to end, so I added a bit of digi-rock in the first half. That's why when many of you first played it, you probably thought, "Is this a sequel to HYPNOTICA?" The theme of the snare pattern in the middle part of the song is "man's war against machine".