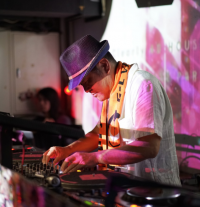 Shoichiro Hirata is a former KONAMI Computer Entertainment Tokyo employee who joined the company in 1995, contributing music both in and out of BEMANI. He was a frequent contributor to beatmania IIDX and DanceDanceRevolution during his tenure, and also did a few songs for pop'n music. He also worked as a music coordinator for a few CS DanceDanceRevoluion games. His musical style of choice in BEMANI was house and 2-step, with some dabbling of R&B on the occasion.

Shoichiro Hirata left KONAMI in 2003 to work at Hello! Project and avex group, but temporarily returned as a commissioned artist in 2006 and 2007 to write some new songs for BEMANI. He's also worked on the Tablier Communications Inc. music label, and composed all of the songs on fellow ex-KONAMI staff member Sanae Shintani's album OLニ〜ニョ.