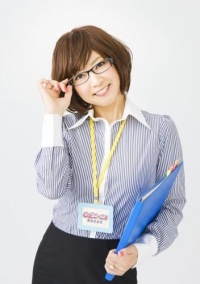 Sanae Shintani is one of BEMANI's first in-house female vocalists, with her work dating back to the very first CS BEMANI game with beatmania YebisuMIX. In high school she was part of a band, and then had a fledging J-POP career when she sang under various house and jazz funk groups. After graduating from university, and changing jobs twice, she joined KONAMI as a receptionist. One day she was asked by a "sound person" (in her words) at KONAMI to send in a demo tape. Not long after, Sana started contributing to BEMANI, mainly pop'n music; staple pop'n music playable character SANAE♥chan was even named after her, often serving as her character in the songs she sang. In the 2010's, she expanded her work into KONAMI's pachinko series of games as well, notably Magical Halloween (マジカルハロウィン).

Sanae left KONAMI in 2012 and joined Tablier Communications Inc.. Since then, she released a mini-album, OLニ〜ニョ, and then appeared in the commercial CD Game Music Prayer. She then released a new EP, MOVING ON, in 2016. She has also occasionally appeared in albums on the Diverse System music label, even releasing an album, Delight.37 - Sana 20th Anniversary solo Album in summer 2019, her full first album since her departure from KONAMI.

Despite her departure, Sana still contributes to new BEMANI music as a commissioned vocalist. She is also a featured vocalist in KONAMI's Magical Halloween (マジカルハロウィン) series.