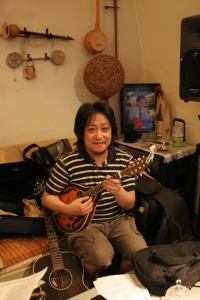 Shunsuke Kida is a Japanese composer who has mainly appeared in the pop'n music series. His music ranges from pop and rock to psychedelic and cossack. He has also made string arrangements for Tomosuke Funaki songs and singer-songwriter KOKIA.

Outside BEMANI, Shunsuke also formed Little Lounge*Little Twinkle after working with a number of bands. In recent years, he has been actively performing as a solo artist.