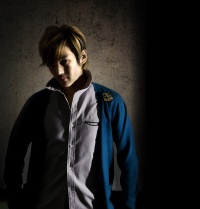 A long-time contributor to BEMANI, Osamu Migitera started off as a sound data analyzer in pop'n music and IIDX before he started writing his own music. He is best known for his happy hardcore songs and his rock tracks under his Des-ROW alias, though he's also dabbled in trance, rap, and poppy songs as well.

Osamu's first original song for BEMANI was the opening theme of beatmania CORE REMIX. Shortly after he composed INNOVATION for pop'n music 5, though he mostly worked on beatmania as a sound director alongside Takehiko Fujii until its end in 2002. Afterwards Osamu has mainly worked on pop'n music, and has served as the sound director of several pop'n music games, as well for the spin off game ポップンリズミン. Recently Osamu has also branched out into almost every BEMANI franchise out right now, including jubeat and DanceDanceRevolution. He's also appeared in several GuitarFreaks and DrumMania installments.

Since so many songs by Osamu Migitera feature guitars, this page will only list under Guitar songs NOT composed by him that he provides guitar for.