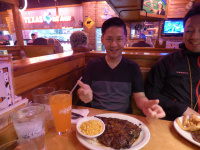 Takehiko Fujii is one of the most recognized artists from early beatmania and beatmania IIDX games, initially creating charts for the early beatmania games, but later contributing with songs and serving as a sound director for both series (in the case of beatmania IIDX, he was for 9th style and 10th style). His music is mostly techno, but he sometimes composes trance, drum'n'bass, electronica and R&B. His much more occidental approach to electronic music than other in-game artists had make him quite popular within the non-Japanese BEMANI fanbase.

Takehiko left KONAMI in late 2003/early 2004 during the production cycle of 10th style, though he continued to appear in BEMANI for a decade after, most notably in beatmania IIDX. He currently owns iNViSiBLE Co., Ltd. (株式会社インビジブル).