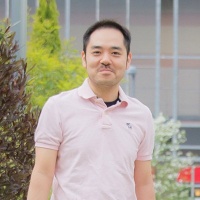 A long-time contributor to both beatmania IIDX and pop'n music, Tomoyuki's work with BEMANI stretches as far back as November 1999, where he started off as a sound data analyzer alongside Osamu Migitera and Jun Wakita in pop'n music 3. Less than a year later he wrote his first BEMANI song for KEYBOARDMANIA 2ndMIX, Ride on the Light. Shortly after he sound directed / supervised seven beatmania IIDX arcade games in a row, starting with beatmania IIDX 4th style. He worked alongside dj TAKA from 4th to 8th, along with SLAKE (who he once managed) in 9th and 10th. He also contributed covers / notecharts for pop'n music alongside his beatmania IIDX duties.

Tomoyuki left KONAMI in 2004 alongside SLAKE, though he continued to work on the CS beatmania IIDX and pop'n music games as a sound data analyzer, the former until beatmania IIDX 16 EMPRESS + PREMIUM BEST. He was last listed in the credits of a BEMANI game as "special thanks" in pop'n music portable 2.

Tomoyuki currently works at Sony Music Publishing Japan (Inc.) as a composer and arranger. Despite this, he still pops up once or twice a year in BEMANI games.

All these albums are from Tomoyuki's non-BEMANI band Dream Line Out, alongside his brother Hiroyuki.