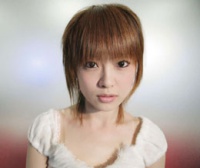 Kanako Watanabe, better known by her Kanako Hoshino (星野奏子) alias, is a vocalist for BEMANI who joined KONAMI following a vocalist audition held by KONAMI in 2004 (the same one that Reiji Sakurai participated in). Since her debut she's sung nearly a couple of dozen songs for BEMANI, and written the lyrics to several other songs not featuring her singing. Her earlier songs were mostly done by DJ Yoshitaka, though she's also extensively worked with Keiichi Ueno and dj TAKA, among others.