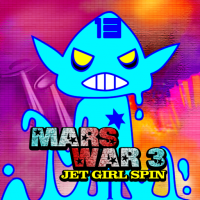 It's a Martian invasion! Protect our planet!!... that good old science fiction.

DanceDanceRevolution difficulty from 1 to 10 from DDRMAX2 to SuperNOVA2, and 1 to 20 from X onwards.
pop'n music difficulty rated from 1 to 43 through pop'n music 20 fantasia, and 1 to 50 from Sunny Park onwards. (Ratings and notecounts obtained from Pop'n Music Fever and BEMANIWiki 2nd.)