This page is for the DanceDanceRevolution SuperNOVA2 song titled Saturn. For the inspiral carpets song of a similar title that appears in Dancing Stage Unleashed, please see SATURN 5. 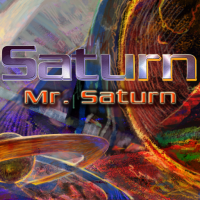 Hello there..
Mr. Saturn, world champion fighter and savior of the world, here.
But you can call me Mr. Saturn, I don't mind. I could go on and on about this, but suffice to say I was told that this latest DDR is a planetary festival, and that I've become Saturn.
That's why I wrote a Saturn-like track. A Saturn-like track?
Yeah, I really don't get it either. Saturn (or Saturnus in Latin) was the Roman equivalent of the Greek god Cronus, father of Zeus and god of the harvest.
Saturn loved eating so much that he devoured his own children.
So, I included a heavy mood and what sounds like a tribal war cry, and then wrapped it all up in some spacey goodness.
Is that Saturn-like?
I really don't know.
Since this was my first experience with DDR, that was enough to get my adrenaline flowing. What's more, I thought it was great how I didn't have to think in terms of sounds becoming buttons like a game, but when I actually got started writing the track and ended up blindly cramming in sounds that seemed like they could become buttons, I think it became an obsession or a kind of sickness.

This song projects an atmosphere of eeriness, giving us a sense of both grandeur and fear. Even though it's rhythm is Techno, composing it with a classical-inspired melody reflects this effect more than anything.