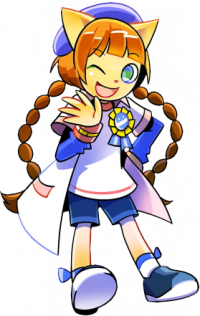 Nyami, as she appears in pop'n music peace.

Nyami is one of the two mascots of the pop'n music franchise, along with her best friend Mimi. The two look almost exactly the same aside from their species - Nyami is a cat, while Mimi is a rabbit. The two are the only characters to appear with new sprites in every core pop'n music game, including CS-only installments pop'n music Best Hits!, pop'n music portable, and うたっち, as well as the spin-off arcade game pop'n stage.

In comparison to Mimi, Nyami (usually) dresses in more boyish attire, especially when it comes to her appearances in covers of anime licenses. This isn't always true, though.

Below is a list of songs Nyami appears in the song as a rival, or cameos in a rival's song. This does not list appearances in games where she was a player character.