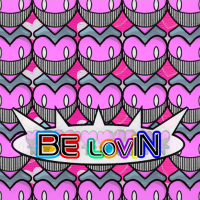 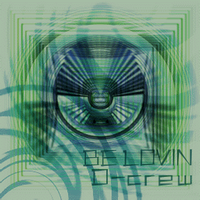 It seems there's various rumors about BE LOVIN floating around on the web, but this song does indeed talk about love.
Try imagining this: an Italian man whispering sweet love over and over again.
Doesn't it just fit the song perfectly?!
The music is as bright as the sun over the Mediterranean Sea, and the lyrics will make you go "everyone, everyone."
Don't get the wrong idea, everyone. Please.

"BE LOVIN" is a really fun happy-hardcore song that keeps you dancing all the way till the end.
With that non-stop driving beat and high-energy melody, this song will easily get stuck in your head and there is no question that you'll be lovin' this song too!

The visuals make dizzying changes, pulsing to the rhythm like an amoeba.
D-crew really poured his heart into the song, and so I got lots and lots of requests to tweak the animations...my head spun trying to figure out where the high point of the song was.
We comprised a lot on the tweaks and in the end they finally got a passing grade!! Hooray!!
So there's 1-turn scratches, right?
I never noticed with normal scratch notes since they're short, but when the scratches are that long they look really glossy!
I bet they'd look really interesting on Hi-Speed 3!
I'm quite skeptical about this song, but it might become my goal to clear it...the one with the yellow stars, that is.