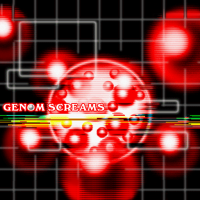 Hello to all of you visiting the KONAMI homepage.
I'm Toshiyuki Kakuta, aka L.E.D. LIGHT, nice to meet all of you. I'm a young techno creator who, starting here with GOTTAMIX, has the privilege of working alongside all these great people.

Now, are all of you familiar with the musical genres of Goa trance and psychedelic trance?
As the story goes, music with elements deriving from German trance and other genres received massive support from DJs in the party scene in the Goa region (a resort area in India). As this music started spreading worldwide, it started to be called Goa trance, taking its name from its place of origin.
Psychedelic trance is apparently a variation of Goa trance, but there don't seem to be any clear-cut differences to me. If I had to say though, all I can think of (personally) is that Goa trance has more of an "Indian Made" (?) vibe to it. That's basically it, don't worry too much about the genre names!
(Oh, right, this is a segment for talking about musical genres, isn't it? Sorry for rambling in the beginning...)

When I said "Indian Made" though, I didn't mean that the music was created by Indian people, but rather that its origins lie with foreign DJs who came to India's resort area of Goa. On that note, in some Goa trance made by European DJs, you can sometimes perceive a (somewhat misunderstood) view of India from a foreign perspective.

As is the case with most dance music, I think you can better "experience" trance by actually taking yourself to parties, rather than listening to it through your home audio equipment. Things like the smell of burning incense in the venue, fantastic images projected onto the walls, and the audience's hyper-unique (?) fashions all mesh well with the loud reverberating sounds, leading to a more trance-like alternate dimension unlike that of everyday life.
And at outdoor parties, which often seem to be held in the mountains or on a beach, the natural backdrop brings out the best in the performances. Trance that plays over the the glow of the morning sun in the background, in particular, is indescribably fantastic.

I would be very honored if 'GENOM SCREAMS' inspires even one person to become interested in trance and take themselves to a party. You'll have a good time, so try to go once - no, go twice, or even three times.
(If the venue's big enough, it won't be that intimidating.)

Until next time, have a happy "BEAT PLAY LIFE"!