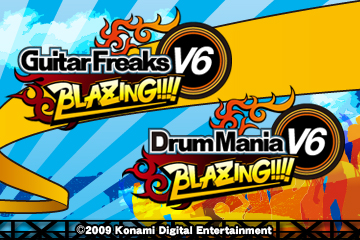 Vampire Killer can be unlocked by having save data on an e-AMUSEMENT PASS from Castlevania: The Arcade (悪魔城ドラキュラ THE ARCADE) arcade game. It was automatically unlocked into Standard Mode as of May 8th, 2009

GuitarFreaks V6 & DrumMania V6 uses an Extra Level system similar to the Extra Rush systems found in V3 to V5. As such, the requirements for EXTRA and ENCORE STAGEs are mostly the same, with a few new additions.

As in previous games, song ratings are issued by the total percent of PERFECTs and GREATs achieved in a song; in addition, a certain number of points are achieved:

To achieve EXTRA STAGE, either player must have a combined total of 0 points at the end of the set. For example, a 3-song set with the results S, S, and A (1+1-1=1) or an S on a 3-song Long song (1 point) would result in an EXTRA STAGE. When EXTRA STAGE is accessed, the player has the option of selecting an EXTRA STAGE song (denoted in red in the songlist) in addition to all normally available songs.

To reach ENCORE STAGE, either player must earn 95% PERFECTs on any one of the EXTRA STAGE songs on any difficulty. The player must also not use any Auto modes; in a 2-player game, neither player can use any Auto modes. When accessed, the ENCORE STAGE and only the ENCORE STAGE will be selectable up to the difficulty equal to the highest difficulty on the EXTRA STAGE on which the requirements were met. As of Extra Level 15, the requirement has been lowered to 92% PERFECTs.

New to GuitarFreaks V6 & DrumMania V6, on some occasions an ENCORE CHANCE will appear on EXTRA STAGE for a select EXTRA STAGE song, noted by the EXTRA STAGE inscription in red. When available, the player may reach ENCORE STAGE by earning only 90% PERFECTs on the song (87% PERFECTs at Extra Level 15). The frequency at which the ENCORE CHANCE appears increases as EXTRA STAGE is obtained on subsequent playthroughs and the closer the PERFECT% is to 95% (92% at Extra Level 15). The exact system is unconfirmed, although BEMANIWiki 2nd has developed a fairly accurate estimate:

Once an ENCORE CHANCE has been obtained, 20 (18) points will need to be obtained again; however, failing the EXTRA STAGE song during ENCORE CHANCE while using the RISKY modifier will allow ENCORE CHANCE to be carried over to the next playthrough.

EXTRA and ENCORE STAGEs are made available for play on all stages as Extra Level increases. Before that time, these songs may be unlocked at certain Extra Levels by achieving a set PERFECT% for the song on any difficulty level, and without using any Auto modes.

Before reaching a designated EXTRA RUSH Level, the EXTRA RUSH STAGEs can be unlocked into Standard play by obtaining a specific achievement ratio on the song. These percentages are listed below:

The Konami official site updates the list daily at 6:00 local time in Japan.
The top 150 songs for the week can be viewed here (archived).

The Konami official site updates the list daily at 6:00 local time in Japan.
The top 150 songs for the week can be viewed here (archived).

The following songs have received new ratings from their last arcade/console appearance:

The following songs from previous releases have been removed from GuitarFreaks V6 & DrumMania V6 BLAZING!!!!: