This is a page for the former J-POP BEMANI music group BeForU. For the DanceDanceRevolution 4thMIX song of a similar name, please see B4U. 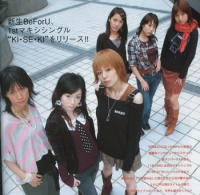 BeForU (originally spelled as Be For U in the DDR games) is a former J-POP idol group formed by DanceDanceRevolution big-name Naoki Maeda in 2001. The original line-up consisted of four girls: Riyu Kosaka (the leader of the group, and the head lyricist), Noria Shiraishi, Yoma Komatsu, and Shiyuna Maehara. The group first appeared in DIVE in DanceDanceRevolution 5thMIX, and later made subsequent appearances in other BEMANI series other than DDR, including GuitarFreaks / DrumMania, pop'n music, and beatmania IIDX.

In 2004 Shiyuna - who had no singles at that point - left the group. This resulted in Naoki opening up slots for some new girls. (It was also open to guys, too - Reiji Sakurai was one of the people who auditioned.) Three new girls, collectively called BeForU NEXT, were chosen: Sayaka Minami, Risa Sotohana, and Miharu Arisawa.

In late 2006 BeForU signed on to Japanese music company avex mode, where the girls continued to appear in BEMANI games as licensed artists for another year or so. In late 2007 Yoma and Miharu left BeForU completely; Noria soon left the group to pursue a solo career, as did Risa. Sayaka left BeForU in early 2008 as well due to sickness, leaving Riyu as the only member left in the group.

In early 2008, a third BeForU group was formed. Along with Riyu and a temporary Sayaka, the new girls were: Megumi Fukushita, Ayano Tachibana, and Hiromi Nishiuchi. The group was now signed on to Gambit, where they produced a single album, Shangri-La (シャングリラ), before going under. In late 2009, the BeForU group was discontinued completely, and all the members went their separate ways. Also in 2008/2009, all of the BeForU songs under the BeForU name (except チカラ), as well as some by the individual members, were removed from DanceDanceRevolution, beatmania IIDX, pop'n music, and GuitarFreaks / DrumMania. Some were later revived, though some of Riyu Kosaka's songs in DanceDanceRevolution, like true... (radio edit) and true... (trance sunrise mix), never were.

For solo/duo songs performed by BeForU members that are not credited to BeForU, please see the Riyu Kosaka, Noria Shiraishi, Nao Komatsu, Sayaka Minami, Miharu Arisawa, and Risa Sotohana pages (Shiyuna Maehara does not have solo songs; her only appearances in BEMANI are covered on the BeForU 2001-2004 BEMANI song listings below).