Break down redirects here. For other songs titled Break Down, please see Break Down (disambiguation). 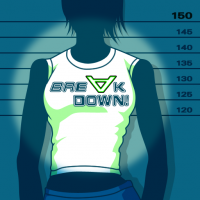 This is my first original rock number in the DDR series, featuring edgy and solid guitars. I personally thought Be For U were better suited for this type of lengthy rock sound, with the girls' current positive power pushing into an energetic and aggressive super pop number, BRE∀K DOWN!

When I heard this song, I thought "So energetic..."
After many all-nighters and greasy meals, my brain, stomach, and pancreas were exhausted, and I was envious of the "energy" of this song.
Moreover, at that time, a certain "MARTIAL BEAT" cabinet was installed at the entrance of the company. It kept screaming "Punch! Kick! One more!", day after day.
The result was:
"Straight punch"
"Aerobics"
"Singing frog"
"A few wiggling frogs", etc.
Looking back, I wonder "Why?", but I'm sure that my state of mind was not normal.
The director, who saw the production, said "This is indeed too much", and therefore, it was never implemented. (..ho-ho..)
If not for that, I might have gone ahead with it.
As such, "Straight punch" and "Aerobics" were used for other songs.
...But, is "Singing Frog" still around?

"Please let me direct BRE∀K DOWN!"
When I requested for it, they came up with something very strong. It was finished without any problems, but when I thought about the reaction it could receive if it was distributed in the market as it originally appeared, I wanted to see that reaction. Hehehe.

RAGE and EMI, who were also used in Sweet Sweet ♥ Magic, also appear in the video, so please love them together with the blue frog.

"BREAK DOWN" by Be For U is the latest song from the same group behind "DIVE." Fans of Japanese pop will surely be getting down with "BREAK DOWN". Check out the other song from Be For U in this game as well.