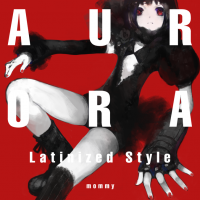 I made a Latin house style arrangement of Ryu☆'s Aurora.
It sounds different from the original song but I took the opportunity of doing it when I thought that part of the song's melody could fit with the Latin rhythm.
I like the part at the beginning of the original song where the melodies overlap.
I'm not sure about everyone else but I'm glad how the arrangement turned out, so I hope you enjoy it.